It’s not by chance that I’m publishing this on July 23rd, 2020, 30 years to the day after McDonald’s announced they were switching from beef tallow to vegetable oil for their french fries. Here’s the thing though:

I found a way to double the beef fat content of french fries!

I suspect that most readers of this blog don’t eat a lot of french fries. Would you be more likely to if the ratio of fat to carbs was higher?

During the original Croissant Diet experiment, by the end I was just eating pancakes because they are the starch that absorb the most fat. The problem is that as I prepared for the Feasting Mimicking Diet I didn’t WANT to eat pancakes, I wanted to eat french fries. In all of my experimenting I’ve been disappointed at how little fat french fries actually absorb.

I started by cutting the fries small like McDonald’s fries to maximize surface area. I used the classic french technique of frying the potatoes once until nearly crisp, then chilling them for an hour to get the starches to gelatinize before quickly frying them a second time. The second frying makes the fries incredibly crispy but it also gives them a second opportunity to absorb the fat. Still, I could only get 26g of beef suet to absorb into 439g of starting weigh french fry cut raw potatoes. That comes out to a disappointing 42% of calories from fat and 52% from carbs. This is not the proper TCD ratio.

I tried frying them starting in cold oil. No luck. I tried making thin cut chips instead of fries. (UK readers heads are exploding right now. They thought we were already talking about chips.) Not much better. I tried making latkes – like McDonald’s hash browns – instead. Still no.

It was time to hit the literature. Sure enough​1​, it’s harder to get highly saturated fats to soak into fries than it is vegetable oil. But I found the secret​2​. “It turns out that fat uptake is basically determined by two mechanisms: the condensation effect and the capillary effect.”

When a deep fried item cools, the steam in it condenses, creating a vacuum that pulls surface fat into the inner starch via capillary action. Problem solved! Clearly then, all one had to do was cool the fries IN beef suet. That way, instead of drawing in surface fat and AIR they’d be drawing in all beef suet!

Look how well this worked:

So now 103g of starting weight potatoes absorbed a whopping 23g of fat!! But even if we assume that 3g of that fat was lost due to splashing of fat, dripping onto the plate, etc, 103g potatoes plus 20g of beef suet yields a fry that gets 70% of its calories from fat and a mere 27% from starch. Now we’ve got TCD ratios!

But how are they? They’re actually really good. They’re less crispy crunchy than the best fries but still quite crisp. The interior has more of a cakey texture. Overall they’re quite nice. Very satiating, though! Don’t try to eat too many.

I keep one bowl of fat whose only role is to be the fat to absorb into the fat bomb fries. This way it doesn’t pick up fryer oil flavors. Of course you have to melt the fat before you can cool the fries in it because you can’t dunk fries into solid fat. Just warm it low and slow and only until the last bits of suet have yet to melt, you want to be below 140 degrees or so.

This is admittedly a fussy way to make fries. But the good news is that you can do the pre-fry and dunk way ahead of time and then keep them in the fridge. They’ll cool into a suet block but they’ll come back apart again in the fryer. Before a meal just pop them into the fryer for a few minutes.

By the way, Malcolm Gladwell has a great history of the McDonald’s french fry at his podcast Revisionist History. Happy 30th anniversary, McDonald’s! 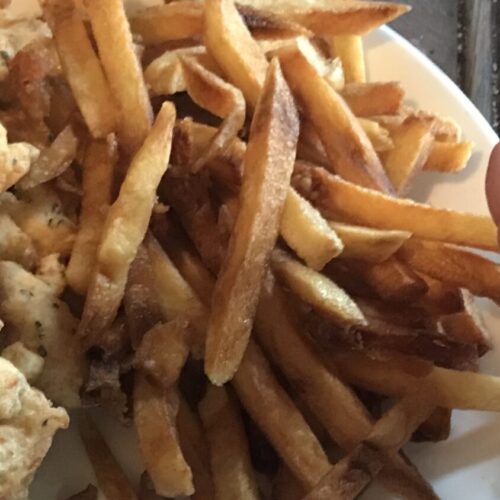