I help my friend Devon with catering. He has a pig farm and does pig roasts/weddings, etc. He asked me the other day, “Is there any thing I can do with these pig heads?”

“You can make jowl bacon from the jowls and the rest can be made into headcheese.” Headcheese, or souse, is essentially a natural aspic make of the gelatin derived from simmering the head and/or trotters of a pig. It is garnished with the slow-simmered tongue, cheeks, ears and snouts and seasoned with an aromatic spice mix. It’s delightful and mostly fat free if you’re avoiding pork because of the high PUFA content.

Naturally derived gelatin also happens to be the best natural source of glycine, the limiting factor in producing glutathione, the body’s master antioxidant.

This is a fun article about making headcheese, but it’s also a science based article about maintaining antioxidant balance. If you’d like to understand a little more of the science about oxidative balance check out Hydrogen Peroxide Flips the Switch and Oxidative Balance: a Simple Regulatory Loop.

Collagen is the most abundant protein in your body. When it is slowly simmered it breaks down into gelatin. The most abundant source of collagen is pig skin. That’s right, pork rinds. And yes, “Jello” really is made out of pig skins to this day.

Collagen, and therefore gelatin, has a very unique amino acid profile compared to muscle proteins. For instance, according to the USDA, gelatin is 20% glycine by weight and only 0.6% methionine, having a glycine:methionine ratio of over 30:1. By comparison, ground beef has a glycine:methionine ratio of about 2.6:1. This is relevant because glycine and methionine are both involved in a process called “one carbon metabolism” or methylation. It turns out that if you consume glycine and methionine together you are not getting the real benefits of pure glycine. Chris Masterjon has a good discussion of this starting at about the 32 minute mark of this podcast. If you really want the benefits of glycine you should consume it in it’s pure form by eating connective tissues, skin or gelatin.

So why do we care about glycine? If you’ve followed this series, you’ll know that the bodies master antioxidant is a small polypeptide called glutathione. Glutathione is basically a tiny protein composed of three amino acids – glutamate, cysteine and glycine. Of these, glycine is typically the limiting factor as discussed in the paper Dietary Glycine Is Rate-Limiting for Glutathione Synthesis and May Have Broad Potential for Health Protection.

Furthermore,  sustained hyperglycemia is associated with low cellular levels of the antioxidant glutathione (GSH), which leads to tissue damage attributed to oxidative stress.  Late stage diabetics typically have very low levels of glutathione, but even in them, glutathione levels will rebound with supplemental glycine.

As discussed in Oxidative Balance, every cell has a built in mechanism to avoid oxidative stress, if you give it the building materials. Getting some free (of methionine) glycine in your diet is the best way to boost your antioxidant system. It is far better than consuming dietary antioxidants. 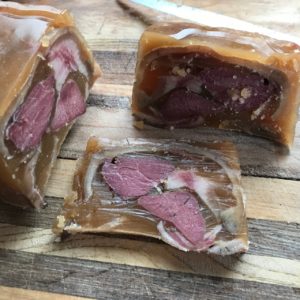 9 thoughts on “When Life Gives You Pig Heads, Use Them To Boost Your Antioxidant System”