I’ve been working on this mega post that was getting too long and complicated.  I decided to break it into three or four parts and start at what was going to be the end.  I’m feeling really excited about this series of posts because I feel like we’re really getting to the root causes of obesity and metabolic syndrome.

I know the molecular biology has gotten pretty deep on Fire In A Bottle as of recent.  Hold on for this series, it’s important!  Then I have some higher level articles that won’t be quite as heady and that I think will be thought provoking.

In this mini-series we’re going to add three new characters – important ones: the sirtuins SIRT1 and SIRT3 and the transcriptional co-activator PGC-1a.  I’ll introduce SIRT3 in this article and  SIRT1 and PGC-1a in the next one.

In this article we’ll see that SIRT3 levels are low in the adipose tissue of obese children and that the enzymes involved in oxidative metabolism have been turned off by a post-translation type of regulation called acetylation.

Many enzymes are regulated by a process called “post-transational regulation”.  This means that enzymes can be produced (translated) and are in the cell, but are not necessarily active until certain conditions are met.  One of the common forms of post-translation regulation are enzymes that attach commonly available molecules to the protein itself.  Kinases, such as AMPK (AMP Kinase) – the hero of my latest series of posts – are a good example of this.  Kinases attach phosphate groups to enzymes.  Sometimes this turns the enzyme ON and sometimes it turns it OFF.  It depends.  Conversely, phosphatases REMOVE phosphate groups.  So the activity level of an enzyme such as ACC, which plays a crucial role in switching between fat burning and glucose burning and which is turned OFF by phosphorylation, is determined by the level of AMPK which phosphorylates it and a phosphatase which dephosphorylates it.  Got it?

Phosphate groups are obtained through the diet, well absorbed and water soluble.  They literally just float in solution until a kinase decides to stick them onto something and turn it on.  Or off.  It depends.

Phosphorylation is the most well known and well studied form of post translational regulation, but as the years have gone by we’ve discovered more and more types of post-translational regulation and realized their importance.  This is true of an hilarious number of small molecules.  Let’s see, we have methylation, propionylation and butyrylation(discovered in 2007)​1​, biotinylation, succinylation (2010)​2​, malonylation(2011)​3​, alkylation, gamma-carboxylation (Vitamin K dependent).  Basically, anything that was lying around,  enzyme systems evolved that sticks them on and takes them off of enzymes as a switch.

Acetylation is a type of post-translational modification that is controlled by acetyltransferases and deacetylases.  Humans have a family of deacetylases called the sirtuins.  There are 7 mammalian sirtuins​4​, abbreviated as SIRT1-SIRT7.  Sirtuins initially became of interest because they were found to be crucial for extending the lifespan of calorie restricted yeast.  They are broadly conserved and their level of activity depends on the ratio of NAD+/NADH.  In this way they are “energy sensors”, similar to AMPK.

The mitochondrial proteins of obese humans are highly acetylated

A 2018 Nature paper showed the shocking degree of acetylation of mitochondrial enzymes in adipose tissue of obese children​5​, including the enzymes citrate synthase and complex 1.  Oxidative metabolism is controlled by the citric acid cycle, which converts acetyl-CoA derived from either glucose, fat, ethanol, protein, or ketones into FADH2 and NADH.   The NADH and FADH2 are then passed through the mitochondrial electron transport chain.  The first step of the citric acid cycle – adding a new acetyl group (ironically) onto oxaloacetate to form citrate – is catalyzed by citrate synthase.

The NADH produced during the citric acid cycle then gets passed into complex I of the electron transport chain.  When the electrons flow through the chain, they are eventually combined with O2 to make water.  Oxygen is the terminal electron acceptor and that’s why we call it oxidative metabolism. 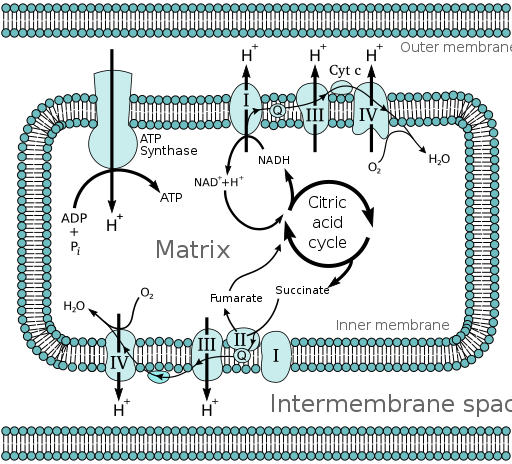 In the mitochondria of obese children, citrate synthase and complex I are highly acetylated and turned OFF.

You can see the problem.  How can an obese person efficiently do oxidative metabolism if their enzymes are turned off?  In addition to Complex I and Citrate synthase being turned off, Complex V – the one that makes the ATP – is also hyperacetylated and ATP levels are low.

It has long been known that both the fat tissue​6​ and muscle tissue​7​ of obese humans have low oxygen consumption rates.  I suspect that acetylated mitochondrial enzymes play a large role in this.

The tissues of obese humans have low oxygen consumption rates, highly acetylated enzymes involved in oxidative metabolism and therefore, presumably, low levels of SIRT3 activity.  How is SIRT3 activated?  That’ll be the subject of the next post, but I’ll give you the brief version.

Did you get all of that?  The take home is that to decrease mitochondrial enzyme deacetylation you have to stimulate AMPK and SIRT1 at the same time.  I have a lot more to say about how to do this, but if you want to try something in the short term, resveratrol activates SIRT1 and berberine activates AMPK.  You could try taking them together.