I am a huge fan of Italian bitter liqueurs.  I was first introduced to the idea when I was working at Memorial Sloan-Kettering in Manhattan.  A co-worker brought in a six pack of bitter soda from a local pizza place.  I took a sip.  It was revolting.  My only thought was, “this tastes like bile!  Literally dry heaves.”

It was weird, though, the sweet and tart balanced out the bitter somehow.  I took another sip.  Still very odd, but somehow I enjoyed it?

Fast forward 20 years and I have developed a love of Italian Amaro.  The most well known (in the US) of which is Campari.  I delight in initiating new members of the Campari club.  The conversation goes something like this.

“Have you ever had Campari?”

“It’s an Italian bitter liqueur.  It tastes like bile.”

“Yeah, literally like dry heaves but sweet and nice somehow.”

Somehow I usually get them to try it.  Most people drink Campari in a cocktail such as a negroni but I just drink it straight at room temperature.  Reactions to it…  vary.

Italians have been making Amaro since Greek and Roman times.  A legend is that Pliny the elder, who died in 79 AD, made amari.  After that, monks took up the tradition of making regional Amari. Amari is the plural.

Since the beginning, Amaro has been considered a health drink.  It is made from grape brandy with a neutral flavor that is steeped with botanicals which can include gentian root, citrus peel, wormwood, rhubarb root, aloe, mugwort, cinnamon, and hundreds of others.

European alchemists remain persuaded that elixirs had beneficial qualities and, in particular, could prolong life—a belief they shared, or perhaps imported from Chinese culture.

Hundreds of years ago, our ancestors sipped liqueurs to strengthen their constitution. “They thought multiple sips a day kept any ailments away,” says Vance Henderson, brand ambassador for Drambuie.   …  According to legend, Henry IV, the king at that time in 1605, sent a representative to their monastery in Vauvert to deliver the directions for making the “elixir of long life.”

Bitter Amari are often taken before a meal as an aperitif or after a meal as a digestif.  This is said to stimulate bile production and aid in digestion.

The monks may have been onto something.  In recent posts I’ve talked about the molecular sequence of events leading from consumption of linoleic acid to a torpid metabolism and that the best way to escape the torpid metabolism might be to stimulate AMPK.

There are two bile acid receptors, known as tgr5 and FXR.

Tgr5 is expressed on the cell surface and when it  is activated by certain specific bile acids, it activates adenylate cyclase which creates cAMP, which activates AMPK​1​.  Tgr5 is expressed in most tissues, including liver, the small and large intestine, the brain and the adrenal glands.

Tgr5 also causes GLP-1 to be released into the bloodstream.  GLP-1 is a circulating hormone that … wait for it … activates AMPK​2​.

FXR is yet another member of the nuclear receptor superfamily, just like PPARy and the aryl hydrocarbon receptor (AhR).  In a recent article I explained that members of the “superfamily” are transcription factors (they turn other genes on) that form dimers (they bind to another family member) before they can do their job.  It takes two to tango.

SREBP-1c and LXR are members of the superfamily who form a dimer to increase the expression of lipogenic (fat making) genes.  AMPK phosphorylates SREBP-1c and turns it off.

So the bile acid receptors are coordinating to increase AMPK activation.  Tgr5 is increasing the activity of AMPK directly, but also indirectly via the release of GLP-1.  AMPK and FXR are coordinating to turn off lipogenic gene expression, including SCD1, both through AMPK phosphorylation of SREBP-1c and by FXR increasing expression of SHP, which competes with SREBP-1c for LXR.  Low levels of SCD1 increase activation of AMPK.

The reason that the Amari have a bitter taste, like bile, is that the body sees the bitter polyphenols as bile.

Gentian is known as the king of bitter herbs and it is the most common bittering agent in Amari.  The bitterness of gentian is caused by a polyphenol called gentiopicroside.  Gentiopicroside is a tgr5 agonist (turns it on)​4​.  Gentiopicroside has been shown to prevent obesity in a diet induced obese rodent model.​5​

The second major component of Amari is citrus.

Without citrus to relieve the tension between bitter and sweet an amaro just doesn’t have all the notes it needs.

“The 14 Most Popular Herbs and Botanicals in Amaro, Explained”, Louis Catizone, Vinepair.

Citrus polyphenols are FXR agonists (turns it on)​6​.  A gut specific FXR agonist was shown to prevent obesity in a rodent model​7​.

So combining gentian and citrus will activate both bile acid receptors.

A dual bile acid receptor agonist has been shown to prevent Progression of Nephropathy in Diabetes and Obesity.​8​

An issue with polyphenols is that they are not well absorbed.  If you can get them solubilized, they are more likely to be absorbed.  Another thing that’s sorta fat soluble, sorta water soluble is ethanol.  Polyphenols are more soluble in ethanol than they are in water.​9​

The monks knew what they were doing.

Readers of this blog know that I love it when traditional food pathways converge with modern science.  Pliny the elder knew that bitter herbs were good for us. He may have learned that from the Chinese.  If you do a google scholar search for “gentiopicroside tgr5” all of the hits are from 2020 and 2021.  The literature about citrus polyphenols and FXR go back as far as 2016. We are just figuring out WHY polyphenols are good now.

You can of course get citrus polyphenols as supplements.  Citrus polyphenols probably stimulate tgr5 as well as FXR​10​.  But the next time it’s cocktail hour, consider that negroni.  Amaro is also great added to seltzer over ice.   I’ll also leave you with my Camparita recipe. 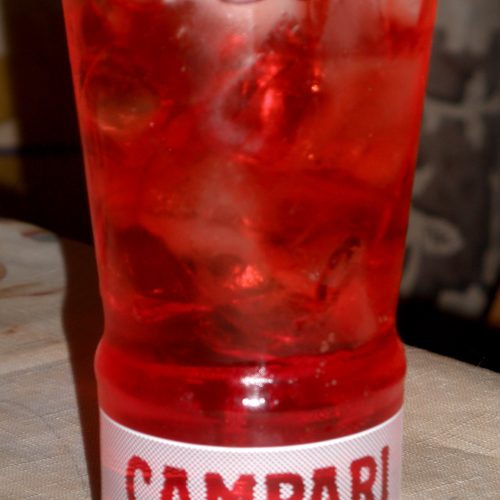 Image Note: The original uploader was WEEN at Russian Wikipedia., CC BY 3.0 <https://creativecommons.org/licenses/by/3.0>, via Wikimedia Commons

For those who don’t want alcohol. I can’t vouch for it personally. Also, Raphael added a pathway drawing.